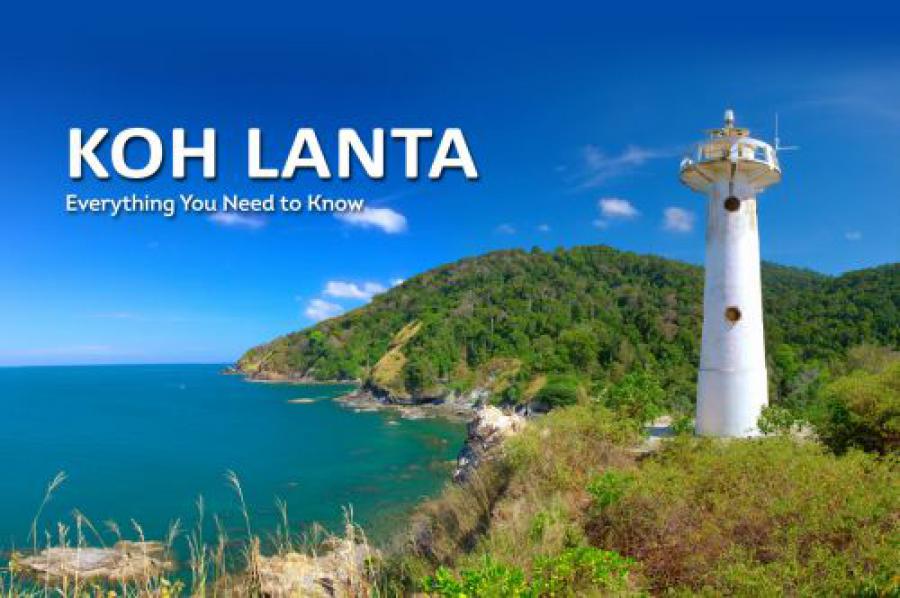 KOH LANTA  The district was established in December 1901. It consists of four island groups : Mu Ko Lanta (170 km), Mu Ko Klang (162 km),Mu Ko Rok (3.5 km), and Mu Ko Ngai (3.6 km). Other island groups are smaller, like Mu Ko Haa.The origin of the name is unclear, but it may originate from the Javanese word "lantas", meaning a type of grill for fish. The name of the island was officially changed to "Lanta"

The district, approximately 70 km from Krabi town, consists of three major islands. The first, Ko Klang, is separated from the mainland by a small river (klong) and road bridge, and is often mistakenly thought of as part of mainland Krabi Province. Of the two remaining larger islands, the largest, more populated Ko Lanta Yai (commonly known as simply "Ko Lanta") and the smaller Ko Lanta Noi, together with 50 other smaller islands make up the 52-island Mu Ko Lanta National Park. The largest island (Ko Lanta Yai) has nine white sandy beaches running down the entire west coast, forests, and tropical jungle. The geography of the island is typically mangroves; coral rimmed beaches; and tree-covered hills. A popular tourist destination, the islands are known for their long, sandy beaches and scuba diving.Ko Lanta Yai and Ko Lanta Noi are connected with a bridge . The bridge has led to many tourist projects on the undeveloped island.

·         Lanta Old Town – Culturally diverse with Chinese merchants, original Thai fishing families, and an ancient Sea Gypsy community. Many years ago, Ko Lanta's Old Town acted as the port and commercial center for the island and provided a safe harbor for Arabic and Chinese trading vessels sailing between the larger ports of Phuket, Penang, and Singapore.

·         Khao Mai Kaew Caves – These caves, in the centre of the island, house impressive stalactites and stalagmites. Some of the caves are just very large and one contains a pool.

·         Sea Gypsy Village – Known to the Thais as "chao-le", sea gypsies have occupied the area for hundreds of years, settling along the coast in stilted houses erected in the sea. They are unique in that they mix very little with the general population, speak their own language, and have their very own traditional beliefs and rituals.

►Scuba Diving The diving surrounding Ko Lanta are considered by many to be among some of the best the country has to offer. There is a variety of fringing reefs, marine life, caves, rocks, and islets.
Hin Daeng and Hin Muang near Ko Lanta are perhaps the best dive sites in Thailand (ranking in the world's top ten) with more than 200 hard corals and 108 reef fish catalogued in a study underway, but thousands more organisms abound. Hin Daeng has the steepest and deepest in the whole of the country with beautiful marine life. Hin Muang next door is completely underwater and it is covered with delicate violet coral. The sites also have one of the world's highest incidences of manta ray sightings, with fairly frequent whale sharks.

►Snorkeling Snorkeling can be done around the three islands, Ko Haa, Ko Bida, and Ko Rok, all accessible from Ko Lanta via speedboat or longtail boat.

►Fishing Fishers usually catch the likes of marlin, sailfish barracuda, red snapper, and tuna during a longtail boat trip having a choice of either day fishing or night fishing.

►Kayaking The east side of Ko Lanta with its rich mangroves is the most suitable for kayaking in peace and quiet while admiring the natural surroundings. Kayaking is also the best way to explore caves. Kayaking can also be done in mangrove swamps at Baan Tungyeepeng and Ko Talabaeng, the limestone cliff near Ko Lanta.

►Hiking Ko Lanta's forests with excellent flora and fauna are suitable for hiking. Elephant rides are usually arranged to take visitors to the top of the hill in Ko Lanta National Park.

►Thai boxing There is one small boxing stadium on the island which hosts regular events. It also holds training camps, which are popular among tourists who wish to learn Thai boxing.

►Spa Traditional Thai massage is aimed at enhancing not only one's physical and emotional state but also to allow one to grow spiritually. There are many spas on this island. Massage on the beach is also possible.